John Tirman, now Executive Director and a Principal Research Scientist at MIT’s Center for International Studies, produced this educational web site on the Cyprus conflict while serving as a Fulbright Senior Scholar in Cyprus in 1999-2000. He continues to maintain this excellent resource.

The role and history of the United Nations’ involvement with Cyprus.

The Elders Documentary and Discussion Guide

Download the discussion guide that accompanies The Elders’ documentary about the search for missing persons in Cyprus. This guide is designed for teachers, students and civil society groups to facilitate discussion about missing persons and memory in post-conflict communities. Available in English, Greek and Turkish.

Before the war of 1974 and even before 1963 there were many mixed villages where TCs and GCs lived together who were separated by the violence. A peace building initiative known as the Co-Villagers Project operated between 1997 and 2003 when the checkpoints opened. A small group of teachers and a few teens searched for long lost friends and organized reunion meetings in the buffer zone in the Pergamos area, near the village of Pyla.

One such reunion brought together more than 1000 people, despite threats and obstacles, on the 1st of July, 2000. A film maker Adonis Florides attended the event. In this short video he captured the greatness of the day. You first see the people coming out from the buses anxiously looking for their old friends. And then the magic of coexistence begins. No words. Just the people and the music.

Documentary “The Other Town”

This award winning documentary, made by Nefin Dinc and Hercules Millas, is the story of two towns, a Greek and a Turkish one, and how many negative “stereotypes and prejudices come out not only from nationalistic education in Turkey and Greece, but also influences from the media, national and religious ceremonies in both countries.” These influences impact Cyprus. 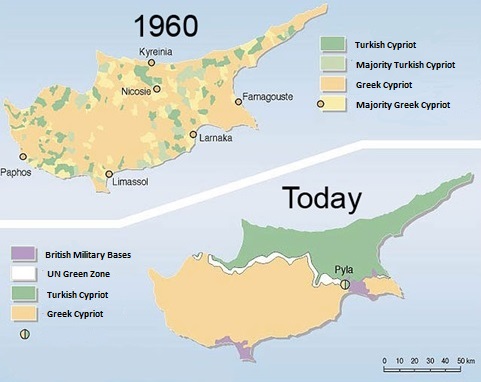 In July 1974, a Greek engineered coup took place on the island and, in response, Turkey landed troops on the island and fighting between the two sides broke out. About 160,000 Greek-Cypriots fled to the south and about 50,000 Turkish-Cypriots fled north. The two communities are separated by a physical barrier called the Green Line that is patrolled by UN troops on the longest peacekeeping mission ever undertaken by the United Nations.

In 1983, the Turkish side unilaterally declared independence under the name of Turkish Republic of Northern Cyprus, which today is only recognized by Turkey. On May 1, 2004, Cyprus as a whole (with the government in the south) was offered entry into the European Union without resolving the conflict.

Ever since 1974, there have been several failed plans and initiatives to negotiate an agreement to reunify the island, mostly under the guidance of the UN. Talks between the current leadership of the two communities continue, but no agreement has as yet been reached.

As a result, Cyprus remains a divided island, with the Turkish-speaking community in the northern part of island and the larger Greek-speaking community in the southern part, separated by UN peacekeepers. Each community has its own version of history and is familiar almost exclusively with the suffering that it has experienced at the hands of the other. So, there is a serious divide and little contact between the two communities. Teens in each community, indeed anyone 40 years or younger, have grown up with little, if any, contact with anyone from the other community.

Even those teens willing to explore a friendship with teens from the other community have little ability to do so. While it is possible to pass through one of the few checkpoint crossings in the Green Line, when they do, they enter a land that uses a different language, a land where their cellphones do not work, and where many of the people will be unfriendly to them. Moreover, they have no place to go where they know there will be counterparts from the other side who might have an interest in meeting them. CFP provides rare, safe opportunities for teens from the two communities to meet and to get to know one another.