Cyprus, located in the eastern Mediterranean, east of Greece, south of Turkey, north of Egypt and west of Syria, has been divided by a patrolled UN buffer zone since 1974, with Turkish-speaking Muslims on the north and Greek-speaking Christians on the south. The Cyprus Friendship Program (CFP) brings together teenagers from both Cypriot communities to promote peaceful interaction and understanding between the two groups. CFP is a year-long peace-building and leadership training program in Cyprus, with a four week cultural exchange component in the United States in the summer. By developing cross-cultural friendships, the teens build mutual respect for each other, breaking down the historical stereotypes and mistrust that exist. Upon return to Cyprus, the teens are in a position to share the message with family and friends of their own communities that Greek-speaking and Turkish-speaking Cypriots can live together peacefully. Indeed, many of the students who have participated in the program are doing just that – working together for peace. 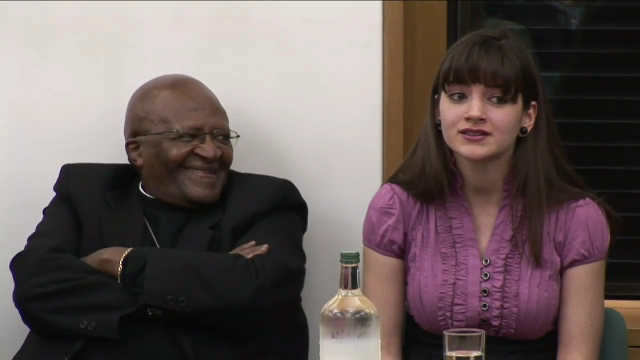 “We are tomorrow’s adults, and we’re seeking support from the whole world.” Idil speaking at the House of Commons, London with Archbishop Emeritus Desmond Tutu (from the video from The Elders.org, which can be viewed at “The future is in our hands”).